Woke up early and got to the race site around 5am. I was one of the first to arrive. I wanted to make sure I got a good parking spot and I also had a flat rear tire I had to deal with. I parked and the guys parked right next to me were working on their bikes. So I asked if they had a tire iron so I could change my tube. They did and I changed it in a few minutes and it was fine. Although, I had to replace the rear Latex tube with a regular tube…oh well, not a biggie. I then went and picked up my packet and got into transition. I found a spot in the back of the rack. I knew ahead of time that I was only going to do the swim and bike and drop out…so I didn’t want to take a prime rack spot.

First thing to do was to get in my 10 minute run that my coach had scheduled for me. I just ran down the course super slow…out 5min and back. Everything was fine there.

I got my wetsuit on with about 20 minutes to the start, talked with some friends and headed down to the lake. I swam to the last buoy and back and felt pretty good. I would estimate it was about a 300 yard swim. Got out and headed over to the start. 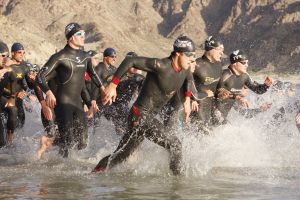 Swim went good although I must say I wasn’t thrilled with the time. I felt like it was the perfect effort level though.

At the start, I took off much faster than normal and apparently everyone else had the same idea because there were several guys sprinting with me. There was NO seeing the first buoy in the sun. I was smart though and picked out some landmarks ahead of time and I used those. I never once corrected my swim line. I swam perfectly straight to the first buoy. I could see that a couple guys had taken off. I knew some of the guys there and expected that.

On the way back, I had to correct course a couple times. There was an intermediate buoy that you were suppose to keep on your left on the way to the next turn buoy. Well, this intermediate buoy was NOT in a straight line to the next turn buoy. I was correcting off of everyone else but the problem was they were swimming to the middle buoy, instead of swimming to the turn buoy. So I finally figured out why I felt like I was swimming off course, because I was following dumb people…I just swam straight to the turn buoy. Just before the last turn buoy, a guy passed me with my color cap on. I sat on his feet all the way in.

Maybe swim harder? I guess I could have. This is a tough leg to experiment with though. You don’t want to mess up the rest of your race trying to pin the swim. My swim fitness is good…I should have been just a little faster than this.

I will also say that my run to the timing mat was slow. It was over a gravel path and it was a tough run. I could have picked it up there as well. I also have to take into consideration that I did finish the swim within some of the Elite times, so I can’t be too bummed.

Transition went well although I was not really trying to haul ass. I’ve got it down to such few things though, it goes fast anyway.

Power was down but speed was good. Which I kind of figured. My position is good, just not very powerful…but the goal is speed, not power. There were a couple things I didn’t like and I’m going to make a couple changes to my position,…very minor ones. It did take a while to find my legs and all my peak power numbers came in the second half of the race.

Bike starts off on a pretty shitty road but then gets on a flat smooth road for the rest of the ride. I felt like I was going fast right off the bat, but legs felt fatigued. I had a plan to not go real hard for the first 10-15 minutes and I did stick to that…but they still felt sore. It wasn’t till about the half way point that they actually came around. I hooked up with two other riders and we swapped spots several times. They would hammer out of the corners and pass me but I wasn’t having any of that. I would just roll up to speed and pass them back.

We caught a TON of people and were really riding pretty fast.

I was happy with the ride. My goal was to break an hour and I did that. I wish I would have felt a little better on the bike. I think more warm up might be needed to get that initial shock out of my legs that morning.

Maybe spin before the race. It took a solid 20 minutes to find my legs.

Dropped out in T2….I was in third place at the time, and only seconds out of first. Such a weird feeling to be doing that good and have to stop.

Didn’t do the run portion.

Not much, just rested in transition and cheered on some friends.

What limited your ability to perform faster:

Like I mentioned above, I’m going to experiment with riding some before the race.

I'm an Age Group triathlete out of Southern California...
View all posts by Dusty Nabor →
This entry was posted in Uncategorized. Bookmark the permalink.